I remember back to 1977, at the age of 11, when I first heard about amateur radio. I thought to myself, what an exciting hobby where a person can learn Morse code, talk all over the world, and make new friends. Unfortunately, I ran into a problem because no hams lived in the development where I was growing up. I couldn't drive,and both of my parents worked. However, I never lost interest and received my first amateur radio license 18 years ago when I was 25 years old. With my new license in hand I went right for DXing. I just wanted to talk to everyone in every country. After one month of DXing I was introduced to contesting by my first Elmer, Rick, WC2K, who over the years has also become a very good friend. Rick has passed along a wealth of knowledge so without his help I probably would not be the operator I am today.

In 1992, one year after I was licensed, I won the ARRL 10 Meter contest for single operator, phone, low power, technician in the Southern New Jersey section and first place in area 2 of the 10-10 international award. At this time I also became a paper chaser looking for all of the awards I could get, which included joining all of the 10-10 chapters I could find. I have calmed down now as I no longer chase many awards now; however, I still like seeing my name in the top five spots of contest winners listings. In less than one year after receiving my license, I had DXCC on 10 meters and had worked all states. Two years later, I had about 190 confirmed countries on 10 meters and was hammering away at CW. I became a member of the FISTS (The International Morse Preservation Society) in 1994 as member 1249.

My wife Donna and I were married in 1998 and in 2006 she decided to become part of my hobby making us a perfect match. She now holds an extra class license and is W2DOB. Donna and I have three beautiful little girls whose ages are 5, 6, and 9. My oldest daughter is Paige. She likes to watch her dad operate so much that whenever I.m operating in a contest she stays in the shack with me and eats, sleeps, and listens to the radio the whole time. Paige has become so interested in ham radio that at the age of 8 she became a technician license holder and quickly took and passed the general license exam. Recently, she has applied for and received my old callsign, N2PKP. Paige is now 9 years old and holds an extra class license and is studying Morse code. I feel that I have been very blessed with a family who understands my passion for amateur radio and who care enough for me and this hobby to make it a part of their life too.

Our station consists of: two ICOM 756 PRO II transceivers and two ICOM PW-1 amplifiers, which are used for contesting in the multi-two category. Our antennas are: 2 element Cushcraft 40 M beam 5 element M2 20 M beam 4 element Hygain 17 M beam 4 element M2 15 M beam and above the 15 M antenna is a 4 element M2 12 M beam. We also have wire antennas consisting of an inverted V on 80 M, an inverted V on 160 M, and a full size delta loop on 160 M. A 700 foot beverage antenna is used for listening, which is terminated so we can hear European stations. As for my greatest loves and accomplishments, I would have to say first love is for my beautiful wife Donna and our three children Paige, Mackenzie, and Amber. Second is my love for the hobby of amateur radio. I like helping other people get involved in amateur radio, especially youth. In my eyes today's youth are the future of the hobby that I love so much. Our station is always changing in hopes of improving our signal so if you hear us on the air, please give us a call. 73, Mark K2AX 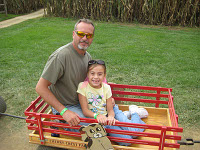 Mark K2AX and Paige N2PKP on a wagon ride around a farm in Pennsylvania.    October 2008